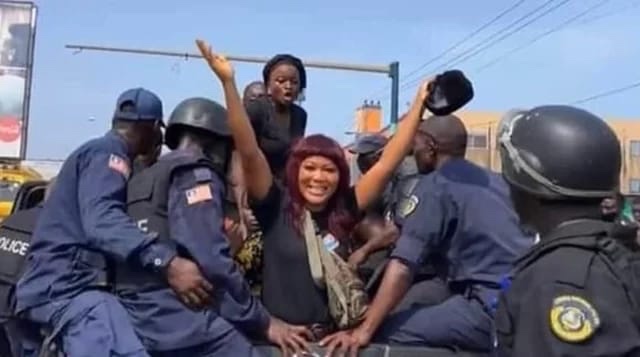 MONROVIA – The Liberia National Police (LNP) has arrested several protesters, who had congregated early Tuesday morning, April 12, 2022, in front of the Freeport of Monrovia on Bushrod Island, calling for justice over the recent mysterious death of 25 years old Princess Cooper and others who mysteriously died in the country.

On Thursday, March 24, 2022, the lifeless body of Princess Cooper was discovered in the fence hosting the Fawaz Construction Materials Store at ELWA Junction in Paynesville.

The deceased, according to an eyewitness account was a caterer, makeup artist, and resident of Tweh Farm Community on Bushrod Island in District#16, Montserrado County.

The mother of the deceased Jartu Cooper said she is frustrated with the way the government and the Liberian National Police are taking the case of her daughter.

“I want justice for my daughter, this is too much, they killed my baby in cold blood. I want (to) die, you have killed me-o-o-oh. Ma Jewel, please come to my cry-o-o-oh; this is too much for me to bear-o-o-oh, let the Liberian people know that I need justice”, Mrs. Cooper lamented.

She said the only thing she wants the Government of Liberia to do is to give justice to her daughter because the pain is too much.

Weeks ago, the Government of Liberia conducted an autopsy on the remains of the late Princess Cooper, but the family boycotted the process.

Family members explained their refusal to witness the autopsy was based on doubt over the qualification of pathologists brought by the government to conduct the exercise.