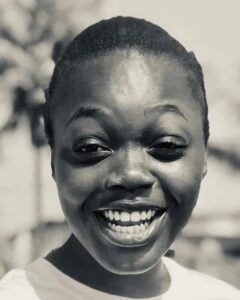 OKFM intern Augustina Gray has finally broken her silence and has taken full responsibility of her actions on social media in regards to the former ruling party(Unity Party) Secretary General Mohammed Ali in an abortion recording.

In her statement, Miss Gray used her Facebook page to extend her deepest gratitude to all reasonable minds who stood by her during these trying times.

Miss Gray said It is obvious that mistakes are allowed to be made, as we have “the ability to redefine ourselves by flushing out of our lives filthy things that may bring backwardness and stagnation”.

She added that she has not been able to see her situation from a negative perspective but rather from an angle of self consciousness.

“Thou the situation brought mental and emotional stress,but somehow I have learned a lot of lessons, some of which has already made me not to trust and confide in everyone because sometimes, people you 100 percent confide in is always 100 percent unworthy of your trust. However, the level of insincerity I experienced will and can never cause me to loose the real me” Miss Gray noted.

She also thanked those that had the worse to say about her noting that she welcome those horrible remarks.

Miss Gray said she did not expect them to feel the pains of a shoe that they never wore.

The United Methodist University Student stated that people develop hatred for her because of what others told them about her without getting to know who she really is, but it is perfectly fine to be hated for standing for what she believes in.

Miss Gray noted that those who never knew who she was but were able to counsel through her difficulties from overseas and in Liberia life becomes interesting and challenging at the same time. when she gets to experience all of its complications and still feels that unquenching desire within, it acts as an opposing force to that which has the proclivity to weigh her down.

Gray stated that she can assure everyone that this will never limit all of what she’s been aspiring for, nor ever distract her. “I was and always will be strong to move forward no matter what comes my way