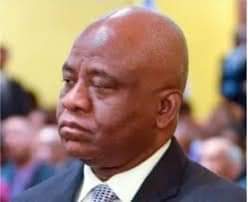 If Brownie Samukai thinks , that he can still be certificated as Senator elect of Lofa County, one would say he might be swimming in an empty pool of elution or only by a miracle that will ever happen.

The former tough taking defense minister, under former President Sirleaf and Co- defendants, James Nyumah Ndokor and Joseph Johnson , were ordered incarcerated by the Supreme Court For two years, for failing to comply to the mandate of the court to pay 50% of the judgement sum in the tone of $US 537, 828, 15 within the period of six months.

All three men were convicted for theft of property, criminal conspiracy and misuse of public money.

They were mandated to restitute the money or risk being imprisoned for two years.

The high court in its judgment on a bill of information filed by the government of Liberia said , given the clear language of its February 8, 2021 opinion, the amount of US$ 190. 000 paid by Co-defendant  Samukai can’t be considered a compliance.

According to the high Court in its judgment read by Associate Justice Sie-A-Nyene Yuoh, ruled that Judge Blamo Dixon, improperly executed the Supreme Court’s mandate when he relied on the ruling of Judge Yamie Quiqui Gbeisay, which was modified.

Judge Blamo Dixon, executing the high court’s mandate apportioned the amount of over US$1million among the respondents and ordered that each of them pay their share of 50% of the sum which he calculated.

But Associate Justice Yuoh maintained that, the law provides that where criminal defendants are jointly adjudged guilty of a crime, they are together considered collectively responsible for any fine or penalty.

According to the Supreme Court, the three named defendants are to remain in jail until the balance is fully settled at the rate of US$25.00 per month, while granting the bill of information by the Government of Liberia.

Meanwhile, the clerk of court has been mandated to order the lower court to resume jurisdiction of the case and give effect to the judgment.

The former Minister of Defense has faced setbacks in taking his seat as Lofa County senator, after the Supreme Court of Liberia
halted his certification by the National Election Commission (NEC).

The nation’s highest court’s decision against Samukai, of the Collaborating Political Parties (CPP), was triggered by a Writ of Prohibition filed March 2,2021, by O’Neil Passewe, chair of the Movement for Progressive Change.

Passewe asked the court to halt the certification of Samukai, because he has been convicted by the Supreme Court .

Samukai received the most votes in the December 8, 2020 Senatorial election.

Of the 11 candidates who contested for the Lofa County senatorial seat, Samukai received 20, 431 votes, followed by Independent candidate Cllr. Joseph Jallah with 13,968 votes.Samukai has experienced mixed rulings with the Supreme Court since he won the senatorial seat in Lofa.

With the latest decision by the Supreme Court, the political ambition of Mr. Samukai has been thwarted for good.

There has been bad blood running between citizens of Lofa and the executive, with accusation that the government allegedly orchestrated a political plot to deny Samukai’s certification.

Well, if Samukai can restitute the full 50% of the AFL pension money to prevent him from going to jail, his chances of becoming senator could suffice.

But looking afar from a political lens, his only savior now is president George Weah, who could pardon him and others, using his executive clemency power.