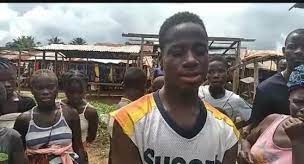 Information reaching Dakpannah 24 says a meeting has been arranged between President George Weah and 19-year old Emmanuel Tuloe in Monrovia.

Young Tuloe was celebrated as a national hero, after finding US$50,000 and returning it to its rightful owner in Nimba County.

The President’s Special Aid, Sekou Kalasco Damaro, made the disclosure on Friday, 15 October 2021.

Mr. Damaro said Emmanuel Tuloe is expected to be accompanied by his father during the meeting with President Weah.

Meanwhile, several Liberians hailed President Weah for calling for a meeting with Tuloe, describing it as an incentive to show character and a high level of integrity.

Emmanuel Tuloe, who became a national hero after finding $50,000 and returning it to the legitimate owner, confirmed that he would meet with President George M. Weah this coming week.

Emmanuel Tuloe told the Associated Press on Friday that he had been invited to meet with President George Weah on Monday.

Tuloe’s Dad also confirmed the meeting with Weah, stating that an official from the president’s office had called to offer the invitation.

19-year-old Tuloe was driving his motorcycle taxi on a highway on Tuesday, when he saw a bunch of money wrapped in a plastic bag that had dropped unnoticed, he told AP.

“I was afraid because it was plenty (of money) and so I brought it home and gave it to my aunty to keep until the owner could ask for it,” he said.

That day, Musu Yancy, the businesswoman who had lost the money, went on the radio “crying for her money and appealing to anyone finding it,” he said. Then he gave it to her.

The Liberia Anti-Corruption Commission commended Tuloe for returning the cash.

Tuloe said that while many Liberians are praising his actions, others, including some friends, are mocking him for doing what is unusual in Liberia, where many are mired in poverty as the country slowly recovers from lengthy back-to-back civil wars.

“Since my decision, when I have a breakdown on the highway and some of my rider friends see me, they don’t help me. They say I acted stupidly to find and return the money,” he told the AP of his hometown of Gbolor Dialla, on the border with Ivory Coast.

“They tell me I will never be rich in my lifetime,” he said. “They say that because I have given back such a sum of money, I shall live and die poor.”

He has also received threats as a result of his actions. “I need to protect myself,” he said.

But Tuloe strongly defends his honesty, advising others to return money, cell phones or other items they may find.

“If the owner asks, they should return it because we don’t know the future,” he said.

The business woman rewarded Tuloe with money and materials valued at about $1,500, he said.

He will share the reward with some of those who were travelling with him on his motorbike, he said.

“But the mattress I got will be given to my grandma,” he said firmly.