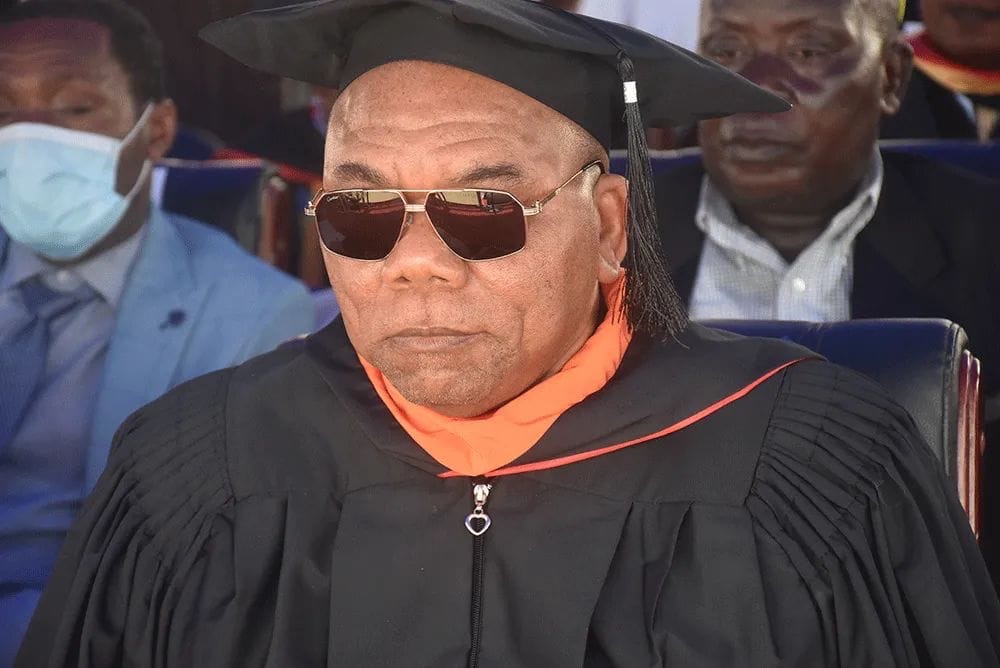 The President Pro – Tempore of the Liberian Senate Hon. Albert T. Chie has challenged graduates of the University of Liberia (UL) to go and change the narrative in the larger society, cautioning them to not join the bandwagon of many of the technical people who are not up to the task.

Serving as the Keynote Speaker on the second day of UL’s 102nd Commencement Convocation in Fendall, Wednesday, March 16, 2022, Pro – Tempore Chie told the graduates that Liberia depends on them to change the narrative. “The future is yours and your destiny lies in your own hands. But always remember what Shakespear said: ‘life is like a candle on a stage …’ very brief. Make the most of it, while you can. Liberia depends on you to change the narrative,” said Hon. Chie. He addressed the graduates on the topic “Science as a basic ingredient in a Political and Economic Recipe: Are you ready to change the narrative?”

The Keynote Speaker, Hon. Chie explained that the foundation of engineering, technology, agriculture, forestry and medicine, and health, is science, therefore, all of the graduates will share that common parentage.

Addressing each of the colleges, Hon. Chie indicated that despite the bountiful rain, vast stretches of land, trained manpower just like the graduates, an array of programs well-funded by the National Budget, and the international donations and contributions, Liberia has failed in agricultural production. “We import almost everything, including Oranges and pepper. Self-sufficiency in the production of rice, our staple food, remains elusive,” he said, adding that on average, Liberia imports approximately 250,000 metric tons of rice or 10 million of the 25 kg bags at the cost of US$140m annually. “Leadership in the agriculture sector also remains elusive. One President after the other has tried various qualified personnel to run the agricultural sector, including managers from the private sector. Still, agricultural productivity remains very low,” Hon. Chie stated.

“… My young prospective graduates, are you ready to change the narrative in the political and economic recipe?” Hon. Chie asked. He further told graduates from the Engineering College that the Government of Liberia and its partners have spent hundreds of millions of US dollars since the end of the civil crisis to now in an attempt to provide reasonable and affordable electricity to various households and businesses. Yet, he said, power supply remains elusive.

“Some of the problems in the power sector can be put squarely at the feet of engineers and technicians. Prospective Electrical Engineers, your country is waiting on you to change the narrative,” Hon. Chie continued.

Despite this revenue allocation, he said, the situation at the John F. Kennedy Medical Hospital has not improved much, nor have the health delivery systems throughout the country.

“I, therefore, challenge you, my fellow students, to come to the labor force with a new determination to change the status quo,” Pro – Tempore Chie pleaded with the graduates. Giving his perspective on the business enterprises in the political and economic recipe, Pro – Tempore Chie argued that to grow the Liberian economy, the country has to export more than it imports goods and services, or at the minimum, try to achieve a balance between imports and exports.
“Only businesses can help the Government achieve this. You often hear the slogan: ‘Liberianization Policy; Liberians should not be spectators in their economy.’ Yes, we agree, let us take a look at ourselves and the situation,” he added.

Hon. Chie said he believes that the graduates from the four colleges are prepared fully to honor the daunting challenges of life in building a nation whose foundation is anchored on love, peace, humility, respect for one another, and resolve for freedom and justice.

Ms. Aba G. Richards, Valedictorian of the four colleges, remarked that after college, life should not revolve around being inactive or silent, urging fellow graduates to take the relationships created over the years and the specific passions that have emerged and apply them to the degree in a meaningful and constructive way. “Fellow graduates, today is our last day in undergraduate programs, and as we prepare for our future, as we move into tomorrow, let us remember Frederick Douglass’ words, “If there is no struggle, there is no progress,” said Ms. Richards.

She argued that progress in the neighborhoods, communities, districts, and the nation can only happen when brilliant minds like the graduates decide to become engaged in education.

Prof. Dr. Julius Julukon Sarwolo Nelson, Jr., President of the University of Liberia, said Liberia needs more scientists, agriculturists, engineers, nurses, and midwives. “Keep making us proud. Keep making us excited. Go and represent us in the larger society with your knowledge, talents, skills, and abilities,” President Nelson said.
“Today we graduate 264 candidates from the College of Science and Technology including 83 from the Nursing and Midwifery Program, 284 from the College of Agriculture and Forestry, and 158 from the College of Engineering. We are proud of all 789 of you, as you walk out of the halls of the great Lux in Tenebris today,” President Nelson added.

He noted that after 174 years, Liberia still finds itself grappling with the challenges of nation-building and infrastructural development.

“We also are cognizant of the fact that we will not make progress as a nation if we do not make the necessary investment in our younger generation, as we prepare them to assume the helm of leadership of our beloved Mama Liberia in the future,” he said.

President Nelson stated that the University of Liberia is proud to contribute to this process of developing and preparing young minds for the effective and efficient management of our national platform, geared toward peace, unity, tolerance, togetherness, reconciliation, and sustainable development.

Earlier, the Dean of the Thomas J. Faulkner College of Science and Technology, Environmental Studies and Climate Change, Dr. James McClain, said 103 females and 159 males totaling 262 students from the undergraduate programs will become alumni of the College.

He expressed confidence that in the not-too-distant future, the 117 graduates from General Biology, 93 from Biomedical Science, 4 from Microbiology, 29 from Chemistry, 11 from Mathematics, 4 from Physics, 14 from Midwifery, 28 from Nursing and 6 from Public Health will be assets to developing systems through their contributions to Liberia and beyond.

For his part, Associate Prof. Leroy W. Cegbe, Dean of the William R. Tolbert, Jr. College of Agriculture and Forestry, said 284 candidates graduated. He expressed special thanks to the University Administration and all partners for supporting the college during the period under review.

The 102nd Graduating Class of the University of Liberia is named “Naa Neeni Ma,” which is translated in English as “The class of FRUITFULNESS.”

On Wednesday, degrees were conferred on 789 candidates from four colleges including the Thomas J. Faulkner College of Science and Technology, Environmental Studies and Climate Change, the School of Nursing and Midwifery Program, the William R. Tolbert College of Agriculture and Forestry, and the College of Engineering.

The commencement exercise will continue on Thursday, March 17, 2022, in Fendall, with the Lux in Tenebris Honors Scholars Graduating Class Research Symposium.

The UL will over the next one week confer degrees on more than 2,000 candidates from Undergraduate, Graduate, and Professional Schools.