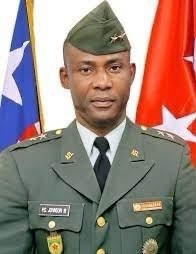 It can be recalled; AFL Chief of Staff Prince Johnson was heard in a leaked audio venting his frustration in Finance Minister Samuel Tweah as an incompetent member of President Weah’s Cabinet.

According to him, Minister Tweah should be more focused on straightening the country’s economic problems than poking into matters concerning the Liberian Army.

The Chief of Staff who seemed to be addressing a gathering of AFL personnel expected to be deployed in Mali said Minister Tweah had no business making policy statement regarding the AFL soldiers’ twenty percent compulsory salary deduction when in fact the Government of Liberia has not provided support for the Army Mali operations in the national budget.
Bur appearing Wednesday as guest on OK FM, Minister Ziankahn, admitted that the voice heard in the leak audio circulating social media was General Prince Johnson, but termed the publication as unfortunate.

According to him the characterization of Finance Minister Samuel Tweah by the AFL Chief of Staff was not appropriate and demanded that General Prince Johnson immediately apologize.