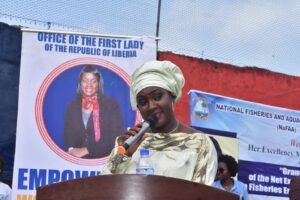 Liberia’s First Lady Mrs. Clar Weah, who was serving as chief launcher of the National Fisheries and Aquaculture Authority’s Net Exchange Program, surprised the fishmongers when she presented a land deed, giving them ownership of a plot of land secured for the construction of a modern workstation in fulfilment of her promise.

Upon making the pronouncement, the West Point Township’s Sports Pitch was a scene of attraction on Thursday, May 13, 2021 as hundreds of fishmongers shouted for joy. They described the First Lady’s action as a demonstration of yet another evidence of being a woman of her word.

“Today I am happy to announce that an appropriate piece of land was found through the Liberia Land Authority in the Popo Beach area to be used by you, my esteemed fishmongers, to enable the preservation of your products and further increase supplies on the domestic market,” Mrs. Weah asserted.

Handing over the land deed, which was neatly fitted in a photo-frame to the fishmongers’ leader, the First Lady said: “I further announce that the land has been surveyed, deed issued and construction will begin shortly.” 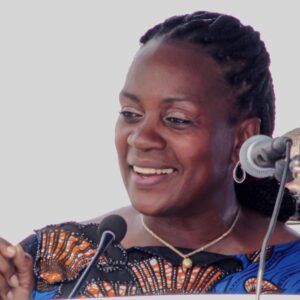 Mrs. Weah’s declaration sparked unending jubilation among the women who were now certain that the challenges of not having a conducive place to shelter from the sun and rain as well as process their fish easily will soon be resolved.

The construction project, which was delayed due to the COVID-19 pandemic, is in fulfilment of the First Lady’s promise to the fishmongers in February last year while visiting them in the Popo-Beach Community to identify with them and inquire about their challenges.

The move is part of her women empowerment initiatives under the She’s You Movement – which is Mrs. Weah’s flagship program aimed at improving the lives of women and girls through advocacy and empowerment for a better and prosperous Liberia.

Amid the jubilation, the First Lady reminded the huge gathering that she and her husband, President George Manneh Weah are committed to delivering on their promises to the people of Liberia.

“We don’t say things and not do them. We have proof for everything we do,” said the First Lady.

“Everything we promised to the Liberian people, the President and the First Lady, we are ‘talk and do.”

Meanwhile, the Liberian First Lady described the Net Exchange program as an initiative that would spur massive economic empowerment of ordinary Liberians who ‘deserve to be empowered in extraordinary ways.’

The program endeavors to replace the rubber or monofilament nets with the internationally accepted thread or multifilament fishing nets in the artisanal fishery sector across Liberia’s nine fishing communities. 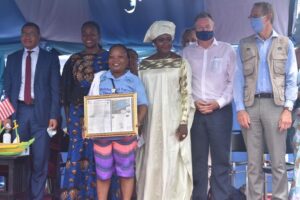 She commended the NaFAA Director General Madam Emma Glassco and team for all the great work in obtaining sponsorship from the international community to undertake important initiatives in an effort to manage and sustain the fisheries resources of Liberia.

Mrs. Weah further commended the government of Japan, the European Union, the World Bank and the United Nations Food and Agricultural organization among others for their sponsorship, support, and implementation of the project.

Director General Glassco pointed out that the fisheries authority has adopted an approach to ensure that fish is available at all times, ‘for our generation today and the ones unborn’. This, Hon Glassco says will provide a cycle of socioeconomic intervention for the people dwelling in fishing communities.

Madam Glassco noted that “as a Government institution, NaFAA remains committed to ensuring that the people of Liberia benefit from their fisheries resources”.