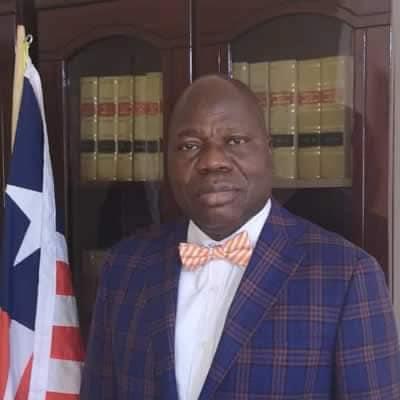 Monrovia: The country’s Solicitor General is always in the news for the wrong reasons.

Just recently , a report by Front Page Africa showed that he placed and received several calls to the  main suspect in a major money laundering case.

Solicitor General Syrennius Cephus,  who didn’t refute the accusation ,  accused the Minister of Justice and other officials within the Ministry of passing on call logs to FrontPageAfrica.

“In the description of the functions of the S.G., the Statute uses the words, ‘subject to the direction and control’ of the Minister of Justice. Unfortunately, the Solicitor General does not work under my supervision. He does not report to me; he runs a parallel Ministry of Justice,” Cllr. Dean said.

The Justice Minister said, as Attorney General, his first function is to procure evidence for, and conduct, prosecute or defend all suits and proceedings in the courts in which the Republic of Liberia or any officer of the Republic is a party or may be intended.

Minister Dean, however, lamented that Cllr. Cephus “is falsely parading himself as the Chief Prosecutor”.

Well, as it seems, the contention between Cllr. Cephus and some ranking officials of the  Ministry of Justice continues to escalate.

What appears to be another shady deal by the SG was revealed by Assistant Minister for Litigation at the Ministry of Justice Cllr. Wesseh A. Wesseh.

Cllr. Wesley  in his revelation contained in a leaked message,  revealed that his role in the Ellen Corkron’s case , as instructed by Cllr. Syrenious Cephas,  brought an embarrassment to him because little did he know that the
Solicitor General of Liberia was conflicted in Economic Sabotage case involving Madam Ellen Corkrum.

“This your move is very unfortunate, in that  you know very well that I have alway  followed your  instructions, like  when you instructed  me to Nolle Prosequoi  the Ellen Corkrum’s  case,  which you and I are  aware caused me serious  embarrassment, because  little did I know that you where conflicted when you represented her in that Economic Sabotage case before the coming  in of this government”Cllr. Wesseh leaked message revealed.

Solicitor General, Cllr. Cephus not on good terms with his special assistant Cllr. Lafayette Could.

Despite all the alleged shady deals by Cllr. Cephus , a leaked message has detailed how he has asked his  Special Assistant Cllr. Lafayette B. Gould Sr.   to resign or risk  being dismissed.

According to Cllr. Cephas’  leaked communication, Cllr. Gould’s action over the last three years has demonstrated he is more of a politician than a prosecutor working with the Ministry of Justice.

The SG said Cllr. Gould’s constant unwarranted attacks on public radios and social media against government officials, the  criminal justice system, Liberian judiciary, and people he perceived as “incompetent”, are egregiously condescending  of the Liberian government and its officials

According to him, Cllr. Gould made a post on social media on the Abe Darius Dillon’s page in which he said “When the nation is filled with mental health issues, what do you expect” a comment Cllr. Cephus believes is a direct insinuation that the current Liberian government is saturated with mentally deranged people, basis for which he called on Cllr. Gould to resign or be dismissed.

Cllr. Gould confirmed that he received message via Whatsapp from Cllr. Cephas, but dismissed all claims  by the SG,  saying the simple reason was that  he filed an action against the SG’s  will and personal interest thus promising  to get back to the public with detail information.

Back to the Assistant Minister for litigation implicating  the Solicitor General to several misdeeds.

Cllr. Wesseh alleged that Cllr. Cephus undermined his  efforts to  prosecute  individuals involved in Barrobo Case and at the same time,  communicated with the Public Defenders in River-Gee County on several occasions to file change of Venue,  without informing him as the prosecutor on ground in River Gee.

“When I followed your unlawful instructions, to file the Nolle Prosequa,  I  ran into problem with the Minister,  because dismissing that major case needed his approbation, even to this end, when I decided to prosecute the Barrobo murder case that was transfered to River Gee, you made  strives   to undermine my efforts to  prosecute   those  individual!, when you on several occasions, communicated with the Public Defenders in River Gee , to file another change of Venue, without informing me as the prosecutor on the ground in River Gee”. the message uncovered.

The Assistant Minister descended on his boss , by uncovering that he  Cllr. Cephus attempted killing an indictment that was brought against the Secretary of the Liberian Senate Narborlor Singbeh and others.

He said Cllr. Cephas and Edwin Martin, the then County Attorney for Montserrado,  told Judge Roosevelt Willie not to send the case to Criminal  Court C” for trial, after the indictment was formed because Cllr. Cephas and Cllr.  Edwin Martin represented some of the parties in the case when they were in private practice.

All these revelations, ranging from alleged collusion with suspects,  have raised public concerns over the integrity  of the  Solicitor General’s to dispense  justice and the rule of law in a fair manner in Liberia.