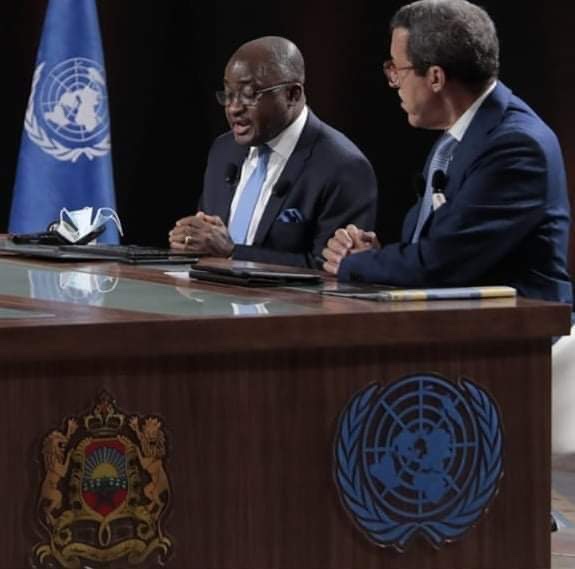 According to dispatch Minister Kemayah said the African Regional Dialogue presents an opportunity to hold vital discussions, not only on the needs of the African continent in general, and individual African countries in particular; but also the ambition to engender a shared path toward the eradication of hunger, building inclusive, healthier food systems and protecting the planet.

Minister Kemayah also noted that, as they endeavor collectively to enhance Africa’s shared vision, core values and perspectives, he wants to also acknowledge the contributions of relevant regional stakeholders, including the African Union, for its leadership in steering the process of developing Africa’s common position, and the partnership of the United Nations Economic Commission for Africa (UNECA).

The Liberian chief diplomat commended the African Union Development Agency (AUDANEPAD) for the establishment of the Africa National Food Systems Conveners’ Platform, bringing together Africa National Conveners with the aim of facilitating peer exchange on the national dialogues and the development of the Africa Common Position on Food Systems, to share on emerging issues and national priorities in pursuit of resilient and inclusive food systems and providing technical support to national conveners.

He said, Africa being no exception, the challenges and fragility of food systems, particularly for the most marginalized populations have become even more evident as a result of the disruption to food systems, caused by the Covid-19 pandemic, further exposing the vulnerabilities in food systems across many African countries. “When the food systems fail, the resulting disorder threatens education, health and the economy, as well as human rights, peace and security,” Foreign Minister Kemayah said.

Minister Kemayah used the occasion to mention that the Government of Liberia (GOL), through the National Dialogue Convener, had initially planned physical in-country dialogues in the five agricultural regions of the country, disclosing that the dialogues were scheduled to be held in June 2021. “Regrettably, the situation of the COVID-19 pandemic in the country, as around the globe, caused a delay in convening the national dialogues.

“It is welcoming and appreciative that the United Nations Resident Coordinator in Liberia has offered the Government of Liberia (GOL), through the National Convener, Hon. Jeanine Milly Cooper, Minister of Agriculture, its field offices in Liberia as hubs to convene the National Dialogues virtually. The dialogues are now scheduled to be held from August 4 – 12, 2021, and will be convened through the assistance of the United Nations Food and Agriculture Organization and World Food Program teleconferencing facilities across the country,” Minister Kemayah maintained.

Minister Kemayah further disclosed that through consultations with stakeholders, four topical issues have been identified for discussion during the national dialogues. The UN Food and Agriculture Organization (FAO), through its technical support to the National Coordination Secretariat, will develop sub-topics and points of discussion. The four-main topical issues for discussion during the National Dialogues will include Food Value Chain Development: Challenges and Opportunities for Liberia’s Economic Growth; Ending Youth Unemployment through Agriculture; Mitigating Climate Impacts on Liberian Farmers; and Reducing Child Malnutrition in Liberia through Viable Food Systems.

These National Dialogues are meant to generate broader views and stimulate inclusive participation from all spectra of Liberian society.