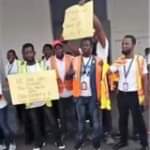 The 20 employees were not only suspended, but were  turned over to the National Security Agency for investigation.

Recently, the management of the RIA announced the suspension of over 20 employees of the entity for their involvement in the prevention of an international flight in protest of the outsourcing of their department without their knowledge, and management failure to pay benefits and salary arrears.

Addressing a press conference in Monrovia, the Congress Secretary General, Isaac Grant said,  the LLC is disturbed by the fact that the dispute has been resolved,  as a result of successful social dialogue conference , which addressed the contentious issues raised by the workers, the management and providing guarantees for labor harmony and workers security at the airport.

He added that it is disappointing to see the RIA management clamping down on workers by issuing unjustified and indefinite suspensions to over 20 workers at the entity.

According to Mr. Grant, the LLC views the action of the management of the RIA as a gross disregard for the essence of social dialogue mechanism, which is fundamental to the promotion of sanity at workplace and flagrant  disrespect to the authority of the Ministry of Labor.

Mr. Grant is calling on the Ministry of Labor to take seize of the  matter and remain engaged with the management of the RIA,  in keeping with the commitment made during the social dialogue conference in the interest of peace and tranquility.

The LLC reminded Minister Nathaniel McGill of the promise he made to the workers on December 30, 2021 that he will ensure that no worker will be dismissed on account of their role in the go-slow action.