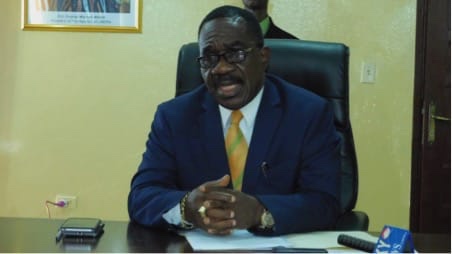 The Minister of Post and Telecommunications, Cllr. Cooper Kruah, has described Cyber Crimes as dangerous to every nation.

Minister Kruah, speaking Friday during a program marking the celebration of Cyber Security Month under the theme “Be Cyber Smart” said cybercrime is harmful and needs the collective efforts of every stakeholder in battling it.

He wants stakeholders and authorities responsible to make efforts in protecting the cyber space.

The Liberia Postmaster further said the Ministry has prepared laws on the book and it is currently before President George Weah awaiting approval and passage by the Legislature.

Minister Kruah maintains that they are expected to establish a cyber-forensic lab, adding that the sum US$90K is needed to implement the project as a means of tracking cyber crimes across the country.

According to the Minister, the lab, when established at the Police Academy, will enhance cyber technicians to track cybercrimes quickly and on time.

In a related development, Minister Kruah has dismissed speculations in the media that the United States Government has suspended postal activities from the U.S as false and misleading.

He revealed that this memo was sent during the heat of the Coronavirus pandemic.

Cllr. Kruah disclosed that banking institutions, the Liberia Electricity Corporation and other institutions are considered as targeted areas that need to support this quest.