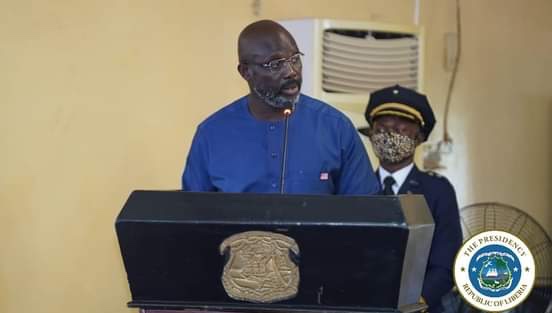 The President of the Republic of Liberia, Dr. George Manneh Weah has updated the United Nations General Assembly on the progress being made by his government in the fight against corruption and graft.

According to a statement from the Executive Mansion Wednesday, June 2, 2021, the Liberian leader acknowledged that corruption constitutes a huge challenge in Liberia,m and told the UNGA that his administration has made enormous strides in purging the country of corruption. He said his commitment in the fight against corruption remains unwavering, evidenced by several anti-corruption measures instituted since assuming office nearly four years ago.

Speaking via Zoom, President Weah told the UNGA that he reconstituted Liberia Anti-Corruption Commission was created in 2019 to assess the framework of Liberia’s fight against corruption, with a mandate to submit proposals to his office that can lead to a more effective national regime.

Meanwhile, the Liberian chief executive reaffirmed his zero tolerance stance on corruption, vowing to ensure transparency and accountability across his administration.

According to the Executive Mansion, the two-day UNGA Session is being convened to discuss challenges and measures to prevent and combat corruption and strengthen international cooperation.

The statement from the Executive Mansion said in addition to reconstituting the anti-corruption commission, the President disclosed that several proposals to reform the inadequate legal framework were submitted to the national legislature in late 2020.

“Making mention of the national Anti-Corruption Commission does not possess powers to exclusively prosecute acts of corruption, and cannot independently compile and verify assets declared by public officials,” President Weah said. It was against that backdrop that bills were submitted to the legislature to strengthen integrity institutions.

The statement quoted President Weah as sayin, “In response to these severely binding constraints on the fight against corruption, I have recently submitted several legal instruments to the National Legislature, seeking to drastically improve the Anti-Corruption Legal Framework in Liberia,”

He went on to note that passage into law of these proposals will make it easier to prevent acts of corruption, and if corruption is committed, easier to ensure accountability.

Other legal instruments submitted to the National Legislature included Vest Direct Prosecution Powers for Acts of Corruption solely in the LACC, Vest Powers to Compile, Verify and Recommend Sanctions in regards to Assets Declarations by Public Officials solely in the LACC, as well as the passage of a Whistleblower’s Act and Establish a Witness Protection Program, amongst many others.

As part of the anti-graft measures, President Weah said, his government ensured that monies stolen from the national coffers were restituted coupled with the convictions of former high-level government officials for acts of grand corruption while in office.

The Liberian leader said that in most of these positive strides his goverment has taken do not get to make international media.” He futher assurred the UN that his government will continue to re-intensify support to the major anti-graft institutions and engender increased coordination and collaboration.

He stressed that his goverment will also begin to aggressively court international support and collaboration now that they have set into motion the proper legal framework that can lead to a successful anti-corruption fight.”

The Liberian Leader said he was pleased to participate in the Special Session of the United Nations General Assembly virtually to discuss challenges and measures to prevent and combat corruption and strengthen international cooperation.

He said since the United Nations Convention against Corruption (UNCAC) and the African Union Convention on Preventing and Combating Corruption (AUPCC were adopted in 2003, the dangerous effects of corruption have been widely documented in various forms across the globe.

However, the President acknowledged that it has been proven that corruption can have long-term undermining effects on the vibrancy of governance, the stability of economies, and the primacy of the rule of law.

Meanwhile President Weah used the occasion to thank the US government for the support provided in investigating allegations of missing 16 billion Liberian dollars which was later found to be untrue.