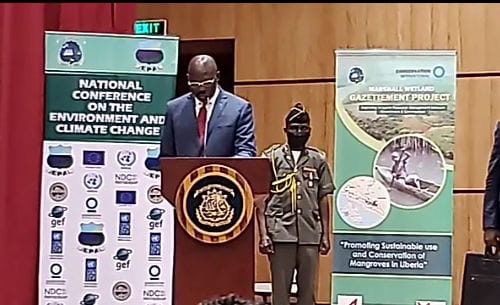 Speaking Wednesday at the Ministerial Complex when he was opening the conference President Weah said, “I am indeed happy to be here today to participate in the official opening of this National Conference on Environment and Climate Change, which is being organized by the Environmental Protection Agency of Liberia under the theme:
“ECOSYSTEM RESTORATION: A PATHWAY TOWARDS A GREENER AND SUSTAINABLE ENVIRONMENT.”

According to President Weah, Liberia signed the Paris Agreement in 2015, but has not ratified it up to the time that he assumed office in 2018.

The Liberian leader said that considering the critical importance of climate change and the role Liberia has always played in forging international collaboration and cooperation, he gave this matter his full support and ensured that the Paris Accord was ratified by the Legislature of the Republic of Liberia in his first year in office. He used the opportunity to congratulate the 54th Legislature for their strong support in this regard.

At the same time President Weah noted that the quick ratification of the agreement demonstrates the seriousness and urgency which his government attaches to the issues of climate change and the environment.

President Weah went on to assure his international counter parts that Liberia will continue to meet its obligations and responsibilities to the Paris Agreement as well as other conventions and protocols on climate change and the environment.

Meanwhile, the Liberian chief executive stressed that despite the disruption of human activities by COVID 19, the goverment has continued to revise its Nationally Determined Contributions, which it anticipate to submit to the United Nations Climate Change Secretariat before the end of this year. Liberia’s revised NDC’s take into consideration all the key sectors across the entire spectrum of climate change and the environment, namely: Agriculture, Energy, Fisheries, Forestry, Green Corridor, Health, Short-Lived Climate Pollutants, Transport, Waste, Gender and Youth, amongst others.

Dr. Weah added that building climate-resilient infrastructure and environmentally-smart projects must be the centerpiece of the government’s national development program, the Pro-Poor Agenda for Prosperity and Development (PAPD). This is why government is working to align the PAPD with initiatives that are sensitive to issues of environment and climate change.

However Presented Weah said his administration is currently making critical interventions in land reclamation and coastal defense projects. “The D. Tweah High School and the Redemption Hospital, both in the Borough of New Kru Town in Monrovia, were recently saved from sea erosion” He said.

Additionally, he said they are now embarking on a similar project for West Point, called The Monrovia Metropolitan Climate Resilient Projec. Apparently, the total cost of the project is US$25 Million, and US$17.2 Million is being funded by a grant from the Green Climate Fund, while another grant of US$10 Million has been approved for a similar project in Greenville, Sinoe County.

At the same time President Weah lamented that for almost three decades Liberia has not been able to conduct a national forest inventory that would enable the goverment to know the approximate value of this critical asset to guide national development planning. “However, with the support of the United Nations Food and Agricultural Organization (FAO), I am pleased to report that Liberia has now concluded the first post-war national forest inventory. We are very grateful to the FAO for this support” the Liberian chief executive said.

He also noted that the inventory revealed that Liberia is still a forested nation that is endowed with many unique plant and animal species. “I can attest to this because during my recent county tours witnessed and deeply appreciated the greenery of our country and its vast and impressive forests”.

Moreover, the Liberian leader said what is important for the government and the entire country now is to ensure that the country’s God-given resources should now be wisely used as a way of meeting the needs of the present generation, without compromising the needs of future generations. The theme of this Conference should be a wake-up call for all of us to work together, in order to ensure that we restore the integrity of those de-graded ecosystems that have been heavily impacted in previous years in the quest for socio-economic development.

President Weah said he was informed that a State of the Environment Report, which is due to be released this year, points to several environmental and climate challenges. These include, but are not limited to:

All of these challenges pose serious risks to the timely attainment of the goals and objectives of the PAPD. It is our moral duty and obligation as citizens to ensure that we manage and protect the environment of Liberia responsibly. I therefore call upon all citizens and foreigners within our borders to work together for a cleaner and more healthy environment.

Meanwhile the Liberian chief executive said his administration remains committed to all of the multilateral environment agreements that Liberia has signed to date, including the Paris Accord, and all other protocols on climate change and the environment.

At the same time President Weah called on Ambassador McCarthy to kindly convey Liberia’s sincere thanks and appreciation to the government of the United States of America for re-joining the Paris Climate Accord. He noted the return of the United States and its global leadership to this important forum will restore hope to the international community, especially the developing countries in Africa, and the Small Island Developing States.

He also expressed thanks to the organizers of the conference . “I would also like to thank the Management and Staff of the Environmental Protection Agency for the work that they do in the interest of our environment and admonish you to continue to do so for the good of Mama Liberia. On my part, I pledge my full support, and that of my government, to the EPA in the faithful execution of its mandate” he said.

Meanwhile, the Liberian leader encouraged all participants to deeply reflect on the theme of the conferences, and critically deliberate with openness and frankness on those issues that the conference is intended to address.

He urged the participants to come up with what he called “realistic decisions that will form the basis of protecting and managing the Liberian environment and strengthen the resilience of the country against the negative impacts of climate change”.