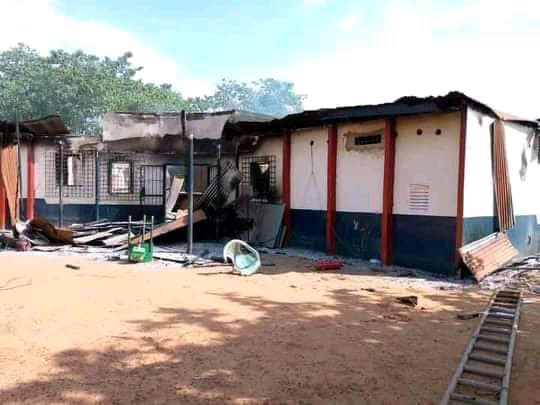 Less than a month after angry protesters burnt down the Head Police Station in ZWEDRU city, Grand Gedeh County, the Reconstruction of the station is expected to get to begin shortly.

According to the county suprintendent, Engineers from the county put Reconstruction cost at US fifty three thousand, eight hundred and eighty six United States dollars (US$53,886.00).

In a press conference with Journalists recently, Superintendent Farley mentioned the management of Cemenco donated one hundred thousand bags of cement to the county for the reconstruction of the facility.

He said the reconstruction of the station is expected to be completed and dedicated on July 26, 2021 and will be turned over to the Liberia National Police.

Meanwhile,the County Superintendent Kai Farley has at the same time constituted Committees to Investigate and lead efforts in rebuilding the Regional Police headquarters in Zwedru.

According to Kai Farley, negotiation is on going with Grand Gedeh County Senator, Hon. Zoe Emmanuel Pennue for the police to use his 2017 legislative project constructed for the youth as guest house located at the youth building under Mr. Mark C. Dweh youth led administration.

He however condemned the recent Violence, terming it as embarrassing, adding that it has the propensity to undermine the growth and development of the county.

The Superintendent call on citizens who took away materials from the police station during and after the incident to return them with immediate effect.

Meanwhile, Supt Farley disclosed that officers involved with the shooting during the protest have been disarmed and are undergoing investigation.

He warned citizens against acts that have the tendency to undermine the peace and security of the state.

It can be recalled on Tuesday May 18, 2021 angry mobs in Zwedru set the region 4 police headquarters at ablaze due to an incident involving the head of the county motorcycles transport union Mr. T. Wilson Nenneh.

The late Flagar and a fulanie, Amadu Bar had a tussle on April 9, 2021 that surrounded ten Liberians dollars change which resulted into serious argument that led to a face fight between the two.

Currently, the Liberia National Police Grand Gedeh detachment is squatting among the county joint securities on Doe street in Zwedru.

Flagar, a former Correction Palace Officer assigned at the Palace of Correction in Grand Gedeh had gone to purchase water from Amadu.

The death of Flagar raised serious concern in street corners in Zwedru that led to the immediate closure of businesses. The late Flaka’s body is yet to be laid to rest.