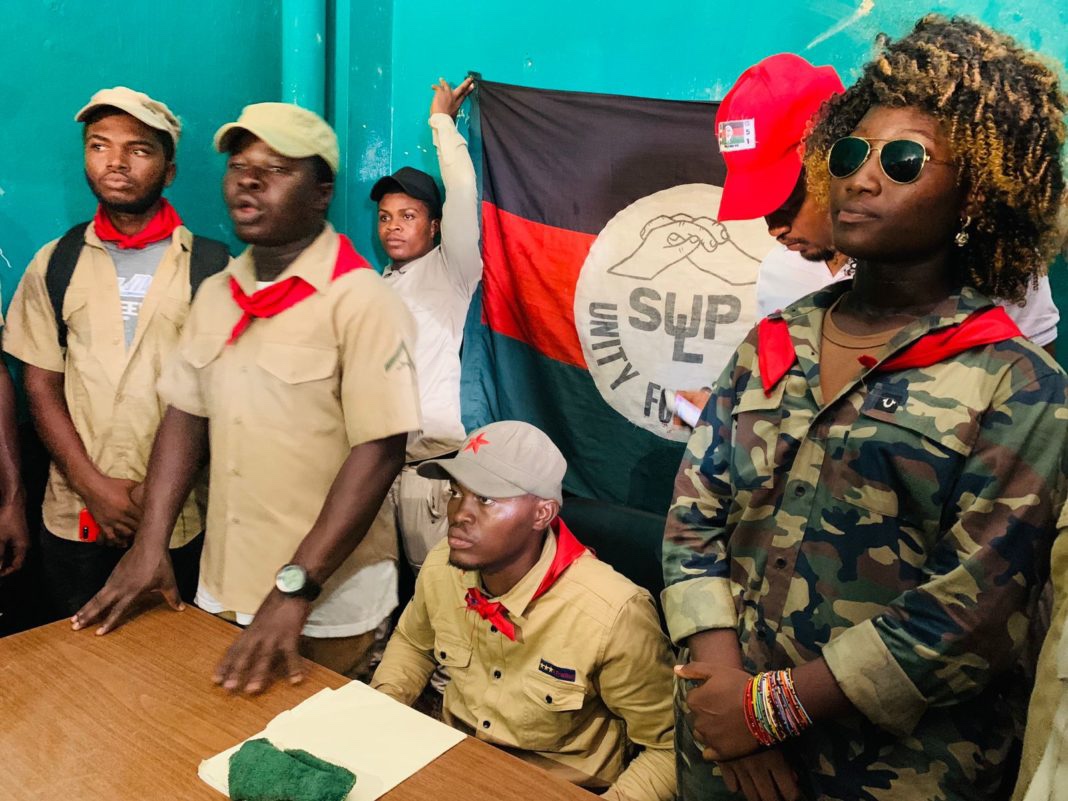 MONROVIA – The University of Liberia campus-based political party, the Vanguard Student Unification Party (SUP) on Wednesday, May 4, 2022, issued a statement condemning according to SUP the unconstitutional suspension of the Federation of Liberian Youth (FLY) President Amos Williams.

The statement signed by Secretary-General, Cde. Jusu Kamara and approved by Chairman Cde. Mustapha N. Kanneh, asked all the forces to return to the status quo, and warns the government, especially Monrovia City Corporation (MCC) & Small Arms Commission Bosses to stop interfering with the affairs of the institution, and extends World Press Freedom Day solidarity to all progressive journalists on the home front and beyond.

The Vanguard Student Unification Party (SUP)
The statement further said: “Comrades in the redemption struggle for the dignity of the oppressed of the peasantry of our people, the “Fix The University Generation” of the conscious students of the University of Liberia, left-wing student radicals profoundly leading the struggle for the honor of the fatherland, militants, cadres and stalwarts of Africa’s biggest embankment of revolutionary consciousness building and progressive enlightenment…”

SUP said it has been closely following the transitional processes of the Federation of Liberian Youth (FLY) and wants to establish that all has been going very well till some members of the National Executive Council unconstitutionally decided to suspend President Amos Williams, a decision according to SUP that is not only a violation of the constitution but also an affront to democracy, adding, “A move that is counterproductive to the progress of the Federation. In the constitution of FLY, under article 8.1.3.”

According to SUP, the constitution spells out clearly that the President is the presiding of all sittings of the institution and that his principal deputies in line only preside when he (the president) is incapable and then delegate the responsibility to his deputies in line to preside. Contrary to this procedure is null and void.

Major Jefferson T. Koijee, major of rhe city of Monrovia…
“The so-called meeting held by the Executive Council members to take a position on suspending President Amos Williams was unconstitutional. The president is not incapacitated to call for Executive Committee’s sitting nor did he delegate any responsibility to anyone to preside over any meeting,” SUP’s statement said.

Adding, “What was displayed by those Executive Committee members is utter disrespect to the Presidency and the Constitution of the very institution they are harboring and vaulting ambitions to serve. SUP wants to be very unequivocal in this regard that President Amos Williams remains the legitimate and recognized Leader of the Federation of Liberia Youth.”

“Moreover, the Student Unification Party sees the unconstitutional setting up of a new Elections Committee by those Executive Council members aside from the constitutional, independent, and credible Elections Committee set up early by President Williams as a very desperate maneuver on their part as people in leadership to undermine and build huge conflict in the youth organization, something that might have very bad aftermath on the gains of the institution.”

“The Independent Elections Commission set up by President Williams is composed of people with noble characters, undoubted integrity, and unbending principles. This commission we trust can organize/conduct a very open and competitive election process void of any outside influence and iota of cheating.”

Atty. Maxwell Grigsby, Chairman Liberia National Commission on Small Arms (LiNCSA)
“Those Executive Council Members have been arguing that the President’s decision to appoint an elections committee not consulting them violates the constitution of FLY and here they are bluntly violating the constitution as well. Appointment power lies in the President, under Article 14, 2.1 of the constitution.”

“The Kangaroo Elections Commission that was set up by those Executive committee members of FLY a few days ago is a big charade and must not be worked with.

“How can they argue that the five members commission set up by the president headed by Mr. Anthony Williams and Mr. Siaffa Bahn Kemokai as Chairperson and Secretary respectively along with Mr. Clarence Flomo, Ms. Kazerline Abigail Johnson, and Ms. Bendu Kamara, was not in line with the constitution and now they come out with a new commission omitting Mr. Anthony Williams and Mr. Siaffa Kemokai from the list, both chairman and secretary and maintaining the rest members of the very committee they condemned?”

“This is very unfortunate and makes no sense at all,” SUP said.

“Now they have restructured the committee making Thomas Mulbah (Chairman) and Gabriel Saydee (Secretary). Thomas Mulbah is the Public Relations Officer at the Small Arms Commission and an unrepentant apologist of the regime.”

According to SUP’s statement, at the Small Arms Commission, Mr. Mulbah’s boss is Atty Maxwell Grigsby, who SUP described as one of those desperate minions of the Coalition for Democratic Change (CDC) government, who according to them sponsoring ploys and conspiracy in FLY to ensure they have a compromised and puppet leadership.

“Grigsby is a lifelong angry and disgruntled young man who was heavily defeated in the 2014 FLY elections by President Emeritus Augustine S. Tamba. A trauma he has struggled to live with for almost a decade now.”

“Again, the Executive Council members appointed Gabriel Saydee, a diehard regime fawner as Secretary-General; an employee at the Liberia Maritime Authority. From all indications, one can see that the members of the Executive Council are very afraid of the competent and independent Elections Committee of Anthony Williams and Siaffa B. Kemokai as chairman and secretary, and this exposes not only their political gerrymandering but also their laziness in going to a competitive process to strive for power.”

In furtherance, SUP said the two appointees by the Executive Committee members in Thomas Mulbah and Gabriel Saydee’s job status as “government officials” also violates the FLY’s constitution which outlines that anyone working in the employ of the government or a government official cannot serve on the Election Commission of FLY.

SUP indicated that with this diabolical plot, it suspects that some or majority of the Executive Council are fronting for a kangaroo and compromised process tasteless of competition and credibility rather than one with credibility, independence, fairness, and a level plain field, saying “Therefore, SUP doesn’t recognize the Elections Committee of Thomas Mulbah and Gabriel Saydee. And so, SUP calls on all young people and the general Liberian public, LINSU, MRUYP, UNFP, UN Women, US, and Swedish Embassies, and all solidarity forces not to recognize or do business with them.”

“Notwithstanding, SUP doesn’t recognize any divided FLY and calls on the entire leadership to return to normal status (status quo ante) and resolve the internal issues of the institution as mature leaders of the young people of Liberia. Anything contrary to this renders all of them as zero people with no leadership compunction and ability and therefore discard even the ones wanting to be president or whatever in the upcoming FLY elections as unfit to run the institution in the aftermath.”

“The entire leadership of Amos Williams and cohorts elected in 2018 is the leadership the Student Unification Party recognizes and they must exercise the best of their leadership qualities at this time of minor disagreement to protect the image of the institution. Already they have not achieved the endeavors for which they were given power in 2018 and they have failed the young people to a certain extent. We welcome no internal wrangling in FLY at this time!”

Meanwhile, the Student Unification warns the CDC regime of indecent charlatans and social misfits to stop interfering in the internal affairs of youth and student institutions for their selfish insatiable political aggrandizement. The degree fraudster and wretched of the earth Monrovia City Mayor, Jefferson T. Koijee and Maxwell Grigsby, the Executive Director of the Liberia Small Arms Commission are the chief masterminders behind the internal crisis and institutional degeneration of the Federation of Liberia Youth.

SUP warns this halfwit simpleton of a city mayor to concentrate on cleaning the dirty and stingy city of Monrovia- a job he is paid for and stop bashing in his arrogance of controlling youth and student institutions while we also caution Mr. Gribsby to focus on controlling the menacing proliferation of small arms circulating the countryside that is the root cause of secret killings and widespread arm robbery in the country.

“Exigently, SUP calls on all of its militants, stalwarts, cadres, and ground forces to refrain from taking sides or supporting individuals/tendencies in the FLY ELECTIONS Process until the party decides to take a definite position on the FLY elections. Anyone found in such an act going forward will be punished in line with the party’s doctrines and constitution.”

In the statement, the Vanguard Student Unification Party also uses this wavelength to express its sentiments of congratulations to the Press Union of Liberia on their celebration of World Press Freedom Day.

“SUP, as one of the progressive institutions that fought for the democratization of this country, wants to reaffirm her support for protecting freedom of speech, expression, and the rights of journalists in this country,” the statement indicated.

The statement further said: “As we have done over the years, SUP remains very committed to protecting all the democratic tenants of the constitution of this country. Notwithstanding, SUP urges the PUL leadership to be very serious about protecting the rights of its members and not to leave them vulnerable to state-sponsored brutality because of their balanced stance on issues.”

“From 2018 to now, there has been a series of cases reported on brutality meted out against journalists and the muzzling of the press in this country, a situation which has led to the death of some of our nation’s decent journalists and the leadership of PUL has taken no decisive position on those cases, a situation that has purged huge fear in some journalists to report sensitive information to the public.”

“We hope going forward, the Charles Cuffey Leadership doubles its game with regard to providing a safe atmosphere for critical voices in the media. We pay homage to all fallen journalists who were victims of state-sponsored violence for their revolutionary role played in seeing our society change for the better; Zenu Millier, Christopher Davies, Tyron Brown, etc., etc…”

“Lastly, SUP calls on all of its militants and stalwarts, commissars and cadres, apostles and disciples to remain disciplined and committed to the ideological doctrines and massescratic philosophy of the Vanguard Party as we decisively move into history to safeguard and protect the future of the Youths and Students of our beloved homeland. Onwards to the final victory for the Youths and Students of Liberia, the struggle lives on!”

Done and issued on this 4th day of May A.D 2022 by and through the mandate of the 31st Central Committee and Politburo of the Vanguard Student Unification Party- SUP!