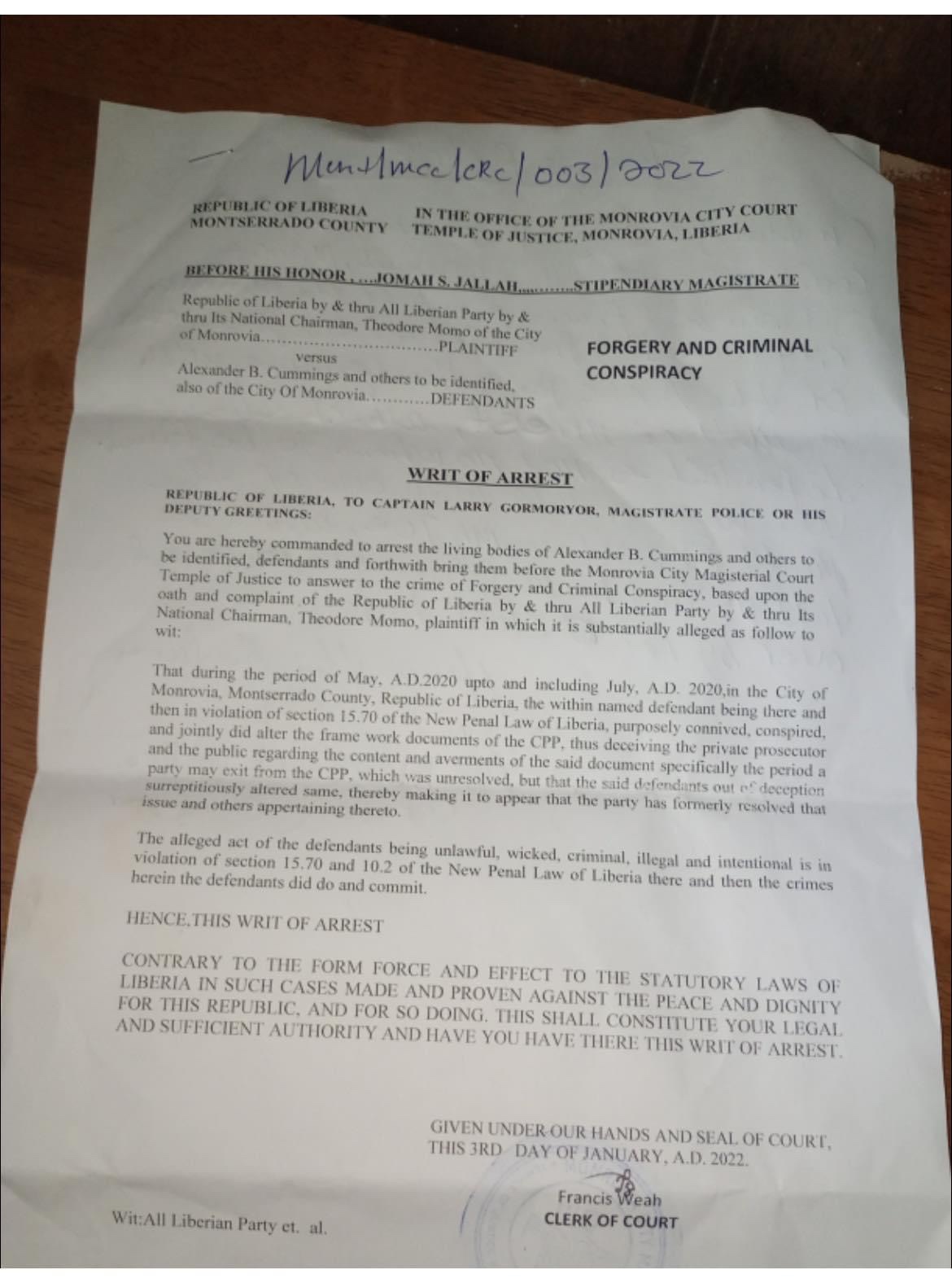 Liberia: It’s no doubt, that the Collaborating Political Party- CPP, is on a life saving mode, and whether it will survive from its chronic disease of political impasse remains the unanswered question.

Following months of political bickering over their frame work document, accusing ANC Alexander Cummings of alleged tempering of it , the ALP – a constituent member , has taken Alexander Cummings to Court , on allegations of forgery and criminal conspiracy.

After complaints filed by the ALP National Chairman, Theodore Momo, the Monrovia City court, through its Judge Jomah Jallah, has ordered the immediate arrest of Mr. Cummings.

According to the complainants, Mr. Cummings in May to July 2020, purposely connived, conspired, and jointly altered the CPP framework document- violating sections 15. 70 and 10.2.

The CPP is a conglomeration of four political parties, comprising the unity party, Liberty party, Alternative National Congress, and the All Liberia Party.

They claimed to be the alternative of Liberia- with a mission to make President George Weah a one term president.

In the middle of last year, the CPP was engulfed in confusion, following allegation that he Mr. Alexander Cummings tempered with the CPP document.

Though, Mr. Benoni Urey who alarmed over the matter didn’t say which specific portion of the document was altered, a committee was set up to investigate.

Following days of investigation by the committee, its findings were submitted to the then chairman of the CPP, Senator Nyonblee Karnga- Lawrence, LP political leader.

Releasing the report to the public, she accused Mr. Cummings of altering the document and called on him to take full responsibility.

In response, he Mr. Cummings disagreed with Senator Lawrence and challenged her to turn the matter over to the lawyers who drafted the document for verification.

Admid the acrimony, the lawyers who drafted the document declined to make a definite position on whether the document was altered or not- a situation that didn’t indicate whether he Mr. Cummings was guilty or not.

As the split within the CPP deepens, and followed by reports that the UP and ALP are on the verge of leaving , many onlookers are eagerly watching as to whether this law suit will catch Mr. Cummings hands in the cookies’ jar.