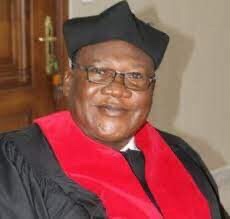 The Associate Justice in Chambers Joseph Nagbe has mandated the National Elections Commission to disallow the certification of Brownie Samukai until the disability imposed on him by his conviction is removed according to law.

The Justice in Chambers’ decision comes after the Movement for Progressive Change (MPC) filed a petition for a Writ of Prohibition on March 1st at the Supreme Court.

According to the petition, Chairman O’ Neil Paasewe prayed that the court restrain and prohibit the NEC from certifying Samukai as the winner of the December 8, 2020 Special Senatorial Election for Lofa County.

The petitioner further explained that the respondent Samukai, being convicted by the First Judicial Circuit for Montserrado County, Criminal Court ‘C’ for the crimes of theft of property, criminal conspiracy and misuse of public funds, which final ruling the Supreme Court confirmed on February 8, following an appeal.

” He is a convicted felon whose civil liberties are ceased for committing the crimes as charged; hence, he cannot occupy and serve in a public office as Senator- elect of Lofa County until the disability is removed; that is, by serving the sentence and certifying the penalty imposed by the trial court and subsequently affirmed by the Supreme Court,” the petitioners added.

Upon the filing of the petition, justice Nagbe issued a stay on the NEC and cited the parties to a conference on March 9.

Following the conference, Justice Nagbe ordered the alternative writ for prohibition issued against the Respondent herein and further ordered by the Clerk of the Court to notify said respondent to file their respective return on or before March 16.

Justice Nagbe explained that if the NEC was to proceed to certificate Samukai as Senator-elect for Lofa County, he would be seated as Senator who was convicted by the court and which conviction has imposed upon him a disability that can be removed by serving the sentence and fully satisfying the penalty. The suspended sentence by operation of law does not vitiate the crime so committed.

Justice Nagbe noted that the statutory law on disqualification or forfeiture contained in the penal code and the 1986 constitution already cited supra are intended to punish crimes so committed.

“In this case, the law provides specifically in section 50.12 and Articles 21(j) of the constitution that Samukai must forfeit the holding of a public office until the sentence is full satisfied the amount of US$ 1,147,656.35 is fully restituted,” he added.

The Associate also said that the law requires any official of government, whether in the Legislature, Executive or Judiciary must take oath before taking upon the duties of the office to which he/she is be elected or appointed.