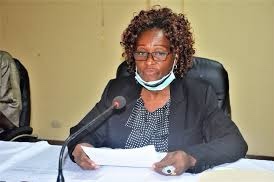 MONROVIA – The National Elections Commission (NEC) on Friday, 6 May 2022 announced the indefinite postponement of the conduct of the much talked about Lofa County senatorial by-election, just a few days before voters could go to the poll, citing an ongoing case at Liberia’s Supreme Court as the reason.

NEC chairperson Madam Davidetta Brown-Lansanah told a press conference at the commission’s headquarters in Sinkor that the by-election’s postponement is due to the ongoing legal dispute between the disintegrated Collaborating Political Parties (CPP) on one hand, and the All Liberian Party (ALP) and Unity Party (UP) on the other hand.

Madam Brown-Lansanah explained that with the current legal matter still at the Supreme Court to decide the matter, the Commission has determined that it will not be feasible to conduct the Lofa County Senatorial By-election on 10 May 2022 as earlier planned.

The CPP, through embattled Liberty Party (LP) chairman Musa Bility, had requested the NEC to prevent UP and ALP from fielding candidates in their own names in the Lofa by-election and by extension, the 2023 presidential and legislative elections, on the basis of their withdrawals from the CPP.

The NEC’s full Board of Commissioners on Monday, 25 April 2022, reaffirmed a decision taken by its hearing officer to stop Unity Party from contesting the Lofa by-election until Liberia’s Supreme Court can decide. The Unity Party has since taken the matter to the Supreme Court.

Originally made up of four opposition parties – UP, Alternative National Congress (ANC), ALP, and LP – the CPP later broke apart, leaving only ANC and a faction of LP as allies following bitter internal conflicts.

The CPP’s fall came in the wake of allegations that ANC political leader Mr. Alexander B. Cummings and his party had allegedly altered the CPP framework document.

However, Mr. Bility believes that a clause within the CPP framework document would prevent UP and ALP from fielding candidates in Lofa after their withdrawals from the opposition bloc.

In keeping with Article 37 of the Constitution of the Republic of Liberia, the NEC has 90 days from the date of receipt of the notification to cause the by-election to be held.

The NEC had scheduled the 2022 Lofa County Senatorial By-election for 10 May 2022, but the case before the Supreme Court would not permit the commission to go ahead with its planned election date of 10 May.

The NEC chairperson indicated that the Commission has already communicated this position to the Legislature, given that any extension of the By-election date beyond the ninety-day constitutional provision will require a further legal mandate.

“Once received, the Commission will communicate a new date for the By-election to the people of Lofa and the Liberian People in general following the final disposition by the Honorable Supreme Court of Liberia of the appeal related to the said 2022 Lofa County Senatorial By-election,” Madam Brown-Lansanah explained.

Meanwhile, she called on all citizens of Lofa County and interested stakeholders in the Lofa County Senatorial by-election to remain calm and peaceful as the legal process unfolds.

The NEC boss also used the opportunity to express sadness and regret over the alleged mysterious disappearance of the commission’s logistic officer in Grand Gedeh County, Mr. Alfred T. Dunner, terming the situation as unfortunate.

“On a sad note, unrelated to the Lofa County By-election, the NEC has learned with disbelief the unfortunate incident of the mysterious disappearance of its Logistics Officer in Grand Gedeh County, Mr. Alfred T. Dunner,” said Madam Brown – Lansanah.

She narrated that the incident has been reported to the Liberia National Police, and the Commission will continue to make follow-ups on the process of the investigation.

“In the meantime, we call on all Liberians to keep Mr. Dunner and his family in our prayers for his safe return,” the NEC chairperson concluded.