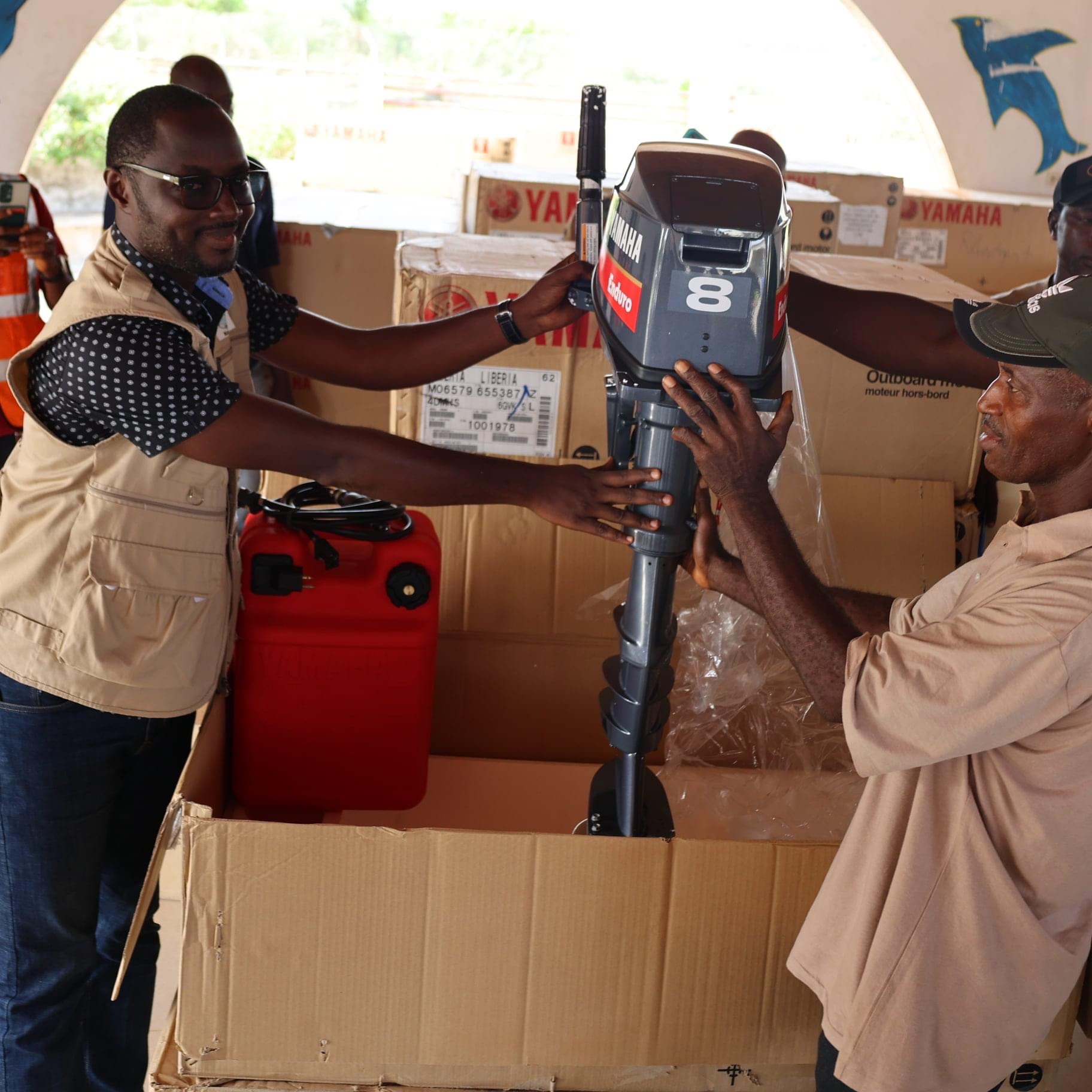 In an effort to transition the fishing industry of Liberia, the National Fisheries and Aquaculture Authority (NAFAA) has made available several Yamaha Outboard Motors to numerous Fishery Cooperatives in Grand Cape Mount County.

The initiative is geared towards implementing President George Manneh Weah’s vision to transition the Liberian Fishing community from paddle to engine as a means of empowering Liberians, which is in line with Pillar One of the Pro-poor Agenda for Prosperity and Development, (PAPD).

Pillar-One of the PAPD seeks to empower Liberians with the relevant tools to gain control of their lives through the provision of equitable opportunities in education, health, youth development and social protection.

It can be recalled that in 2019, President Weah traveled to Japan and requested assistance from the Japanese Government to empower the Liberian Fishery Sector through the provision of outboard motors to fishermen across the country.

The visit of the Liberian leader yielded fruits where the Government of Japan donated 420 Yamaha Motors to the Government of Liberia, which was subsequently turned over to NaFAA by President Weah for onward distribution.

Speaking during the distribution exercise in Grand Cape Mount County, NAAFA’s Deputy Director-General for Administration, Augustine Manoballah, asserted that the Outboard motors are intended for members of the cooperatives which include; canoe owners, fishermen, lifeguards, and fishmongers, adding, that if and not for individual use.
Mr. Manoballah disclosed that before the distribution exercise, NaFAA went into the field and established cooperatives that will ensure that every actor in the sector benefits from the subsequent distribution of the Outboard motor.
“We went to the very landing sites, worked with you, and organized it into a group so that everybody will benefit. What we received is not sufficient for us to say one canoe-man come and take one. This is why the president instructed us to group you people so that everybody will benefit from this,” the NaFAA official emphasized.
He urged members of the cooperatives to coordinate their affairs to ensure that everybody gets their fair share of whatever will be generated.

“Everybody is supposed to benefit from anything that is generated from the operation of this engine. It is not a one-man thing. Because you are the head of the cooperative so you want to use the money alone.; no that’s not what it is for” Manoballah emphasized.

“Those Engines are for those that are part of the Cooperatives, not an individual gift. We are giving these engines to everyone in the cooperative,” Mr. Manoballah noted
He called on beneficiaries of the Presidential gesture to make good use of the items, citing that NaFAA, along with local authorities in the designated areas, will provide routine supervision of the materials donated so that everyone benefits from the initiative.

Meanwhile, the NaFAA official admonished the Fishing Cooperatives to get involved with responsible fishing to foster sustainability in the sector.

He discouraged the fishermen from using illegal methods of fishing, which will subsequently affect the growth of the sector in the country.

Manoballah called on the fishermen not to use rubber nets but use thread nets that are biodegradable, unlike the former.

Receiving the donation on behalf of the Robertsport Fishing Cooperative, Chairman Sam Brown extended gratitude to the Government of Liberia for the initiative.

He added that the provision of the engines will help upgrade their capacities. Brown called on NaFAA to help monitor and guide them in the use of the engines, so that all members of the cooperative will benefit.

At the same time, James Sambollah the Chairman of the Sowee Fishing Cooperative, stated that the distribution of the engines marks a happy day in the lives of fishermen in the county and the country at large.

He assured the Fishing authority that the fishermen will work closely with NaFAA to improve the fishing sector in the country.