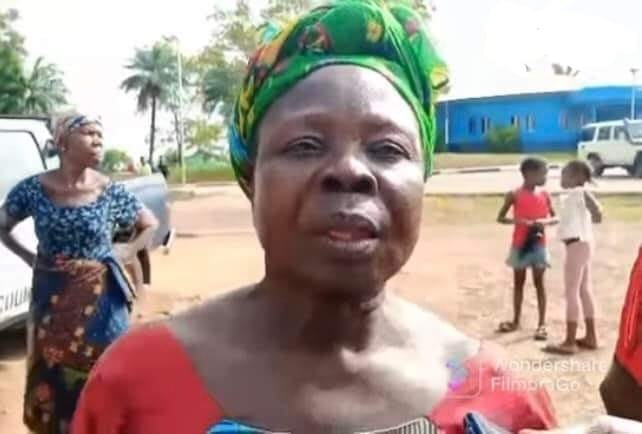 Police in Grand Bassa County have sent to jail a Popular Prayer Mother Martha Doe as a major suspect in the mysterious disappearance of a 45 years old man identified as Joseph Blama.

According to reports, the victim Joseph Blama reportedly went to Madam Martha Doe for prayer to enable him to get a job but mysteriously disappeared during the early morning hours of Friday, March 25, in a local town called “St. John City.”

Mother Doe who is expected to spend her first night behind bars is a popular Prayer Warrior who resides in Buchanan and has run the Prayer Band for years.

According to her, “Man’s wife called me and said her husband been out of a job for years and so I told them to sent him so that he could be part of our prayer service “.

She furthered “ early Friday morning, we all prayed and went to sleep but later we heard a sound like people breaking into the place “.

“ Soon I told Mayor James Brooks, he told me to tell the police that the man was a criminal and I said no I brought him to this prayer band “.

She stressed, “ we search all over but we later discovered the man’s phones and underwear but he couldn’t be found up to now “.

However, Mayor James E. Brooks in an interview with reporters admitted that the incident occurred in his control area.

Brooks admitted to reporters that he and Madam Martha Doe interacted but told her to say it was a criminal attitude after the incident occurred.

The Crime Services Division of the Liberia National Police Bassa detachment disclosed that phones and white underwear believe to be the victim’s property was laying on the road that leads to the st. John river which is also at the back of the prayer band.

The report is quoted as saying the missing man’s assorted clothes and wallet that contained a national Identification card were recovered from the owner of the prayer band in the person of pst. Martha Doe.

However, it is nearly 5 days since the disappearance of the 45 years old man who is yet to be seen.