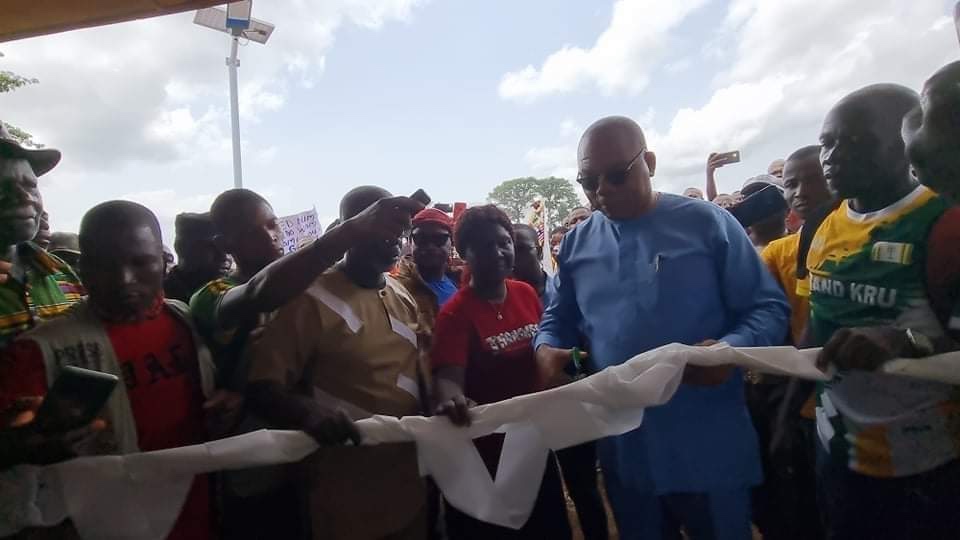 Inclusive of his citizen’s engagement tour, the President Pro-Tempore of the Liberian Senate, Albert T. Chie has made good his promise by erecting and dedicating a modern Youth Center in Boa Geeken, Grand Kru County.

At programs making the dedicatory ceremony Tuesday, March 29, 2022, Pro-Temp Chie promised to equip the center to be one of the best youth centers in the Country.

He used the occasion to thank the people of Boa for their unflinching support of his developmental initiatives.

The Pro-Temp at the same time promised to do more youth-driven projects, noting that the youths are the bedrock of national development, as such officials of the County should do more for them to acquire technical and vocational skills.

Also as part of his efforts to give back to his people, Senator Chie has officially broken grounds for the construction of a Modern Guest House in Doeswen, one of his residential places in Grand Kru.

While officially breaking grounds for the project, Chie said the people of Doeswen had initially made several requests but vital among the many requests they resolved that a modern guest house be constructed to enable them to accommodate guests.

“I will build it, it will be completely managed by the community, and owed 100 percent by the people of Doeswen. We already have the first 75 begs of cement to begin the project” he averred.

County Superintendent Doris N. Ylatun expressed hope that following the completion of the guest house, funds raised will be used to bring more developments to Doeswen.

The Pro-Temp is in the County to engage with his people, dedicate furnished projects, and at the same time work with the citizenry for future priority projects.