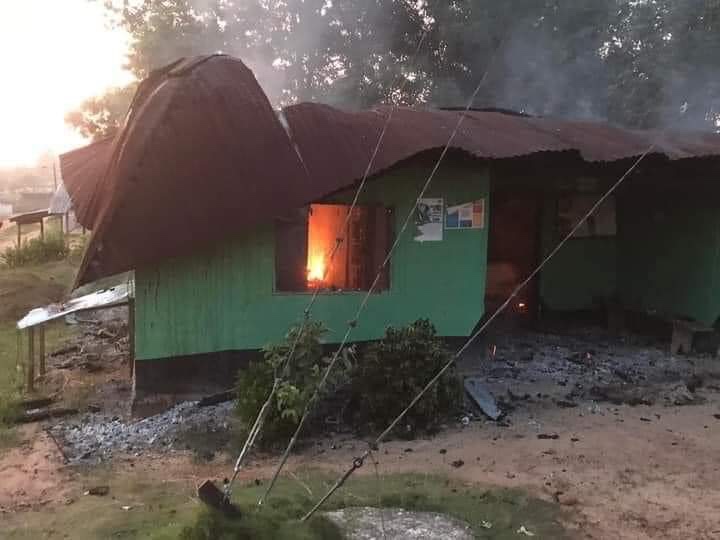 Radio Kintoma is the only community broadcaster in Voinjama District in which the people depend for information on health, education, security, entertainment, and trending community issues.

Voinjama woke up to its favorite radio station being engulfed in fire. Radio Kintoma Manager, Tokpa Tarnue told the Press Union of Liberia, that the radio had not resumed broadcast in the early hours of Saturday, 23rd April 2022 when it was struck by the fire.

The station’s standby generator, an alternative source of its electricity, was off at the time of the fire attack.

Kintoma depends on solar energy for most of its electricity supply. No staff of the broadcaster had reported working before the unfortunate attack on the radio station.

Responders to the outbreak failed to extinguish the fire resulting in the burning of equipment and other assets of the broadcaster. Radio Kintoma is located in the heart of Voinjama Administrative Compound neighboring the 10th Judicial Circuit Court, Lofa County Branch of the Central Bank of Liberia, Mount Carmel Baptist Church, Lofa County Guest House which serves as offices and residence for the Lofa Detachment of the Liberia Drug Enforcement Agency and offices hosting local government authorities.

The station was established in 2005 by Mercy Corps and Search for Common Grounds and has won the Press Union of Liberia Best Community Radio Station of the Year twice.

Of late Radio Kintoma has been the forerunner of advocacy for Female Genital Mutilation (FGM) in Lofa County. Kintoma is revered for its independence in reporting political subjects in Lofa County.

The north-western region is preparing for a contentious by-election that is a result of the blocking of J. Brownie Samukai from being installed as senator of Lofa County after he was convicted of stealing the Armed Forces of Liberia providence fund while serving as Minister of National Defense.

Meanwhile, The Press Union is requesting a speedy and full-scale investigation into the cruel burning of the community service radio station.

The PUL noted that It is an important deterrence when perpetrators of the arson attack on Radio Kintoma are arrested, prosecuted, and reprimanded in line with the Laws of Liberia, the Union insists.

This is the second time in six weeks that a radio station in Lofa has suffered an arson attack. On Saturday, March 5, 2022, Radio Tamba-take in Foya was attacked by unknown individuals in Foya. The arson attack left the station’s only motorbike completely burned.