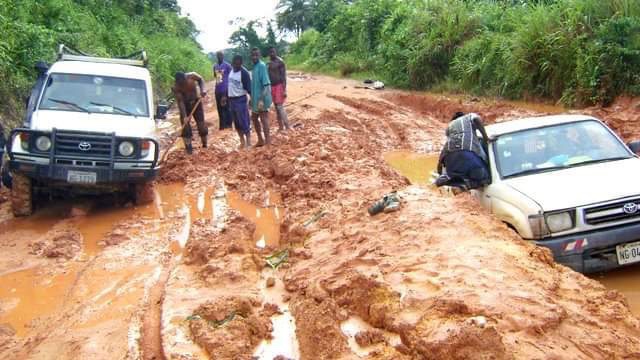 Despite the horrible condition of roads in Grand Kru, Senate Pro-Tempore has called for the immediate cancellation of the contact between the Ministry of Public Works(MPW) and PRIME PLUS CONSTRACTION Inc.

It can be recalled that Prime Plus Construction Inc, was awarded a three-year contract for the rehabilitation of PRIMARY LATERITE roads designated as lot # 2 from Greenville, Sinoe County to Boa Geeken(118.5KM) in Grand Kru.

Addressing a score of citizens Sunday, March 27, 2022, in NIPLAIKPO CITY, Grand Kru during a welcoming ceremony for his arrival in the County, Senator Albert T. Chie said it was baffling to realize that despite the hundreds of thousands of United States Dollars received by Prime Plus Construction Inc over the years, the roads remain deplorable.

“You see how the road looking, this company was given money to maintain this road, but they have failed. We will not allow them to carry Government’s money”. He warned.

Senate Pro-Tempore during the occasion cautioned the Ministry of Public Works to immediately cancel the Prime Plus Construction Inc contract, adding “I will stand here to say this to the Minister of Public Works, I am sure she will listen, you must cancel this contract.”

Concerning Government’s interventions for the South Eastern roads, he disclosed that there has been money placed in the current fiscal envelope to commence the road in the South East beginning with Barclayville, the Capital of Grand Kru.

Pro-Temp Chie mentioned that an amount of US$5 Million was placed in the current budget for the road mentioned, while US$ 500,000 was also allotted to begin the construction of a major bridge that connects the road from Toe Town in Grand Gedeh to Buah through Philadelphia in Grand Kru.

These projects according to him, are foreseen to commence from November to December this year.
The Pro-Tempore noted that the bad roads have created serious economic challenges for citizens and impeded economic advancement in the Counties of Sinoe, Grand Kru, and have also posed a dilemma, especially for motorists, business people, and other commuters.

He is convinced that the Weah led government is making fierce efforts to address the concerns, as road remains the ultimate prerogative of the Government.

In conclusion, Senator Chie commended the people of NIPLAIKPO CITY and its surroundings for turning out in their numbers to welcome him to the County.

Following the EASTER BREAK of the Legislature, the Pro-Tempore is expected to tour the various parts of Grand Kru over the next three weeks to have engagements with his people, to heed, and afterward address some of the major issues facing them.